The name of the Miracle on the Han River is inspired by Germany’s Wirtschaftswunder (The Miracle on the Rhine). It is used to describe South Korea’s fast economic growth from the post-war period to the financial crisis of 1997-1998. Sometimes it is called The East Asian Miracle, with The Four Asian Tiger countries (South Korea, Taiwan, Hong Kong, Singapore).

South Korea was in absolute poverty after its independence from the Japanese Empire. But today, South Korea has 12nd biggest economy in the world (2018) and famous for the car production, display, smartphone and shipbuilding. And it has turned to a donor country from a recipient country in the international organisations, which is sole in the world.

In 1945, Korea gained independence from the Japanese colonial period. It was clear that the independence was great news for Korea, however, at the same time, it meant a disaster for Korea’s economy since Korea had been in the Japanese economy bloc for a long time. And the shock wave was worse in the south, because the north had most of the natural resources in the Korean Peninsula.

<People celebrating the liberation of Korea> 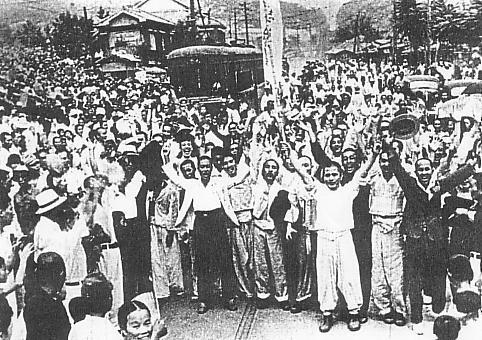 In this period, the United States offered some financial aids, for instance, GARIAO (Government and Relief in Occupied Area) and ECA (Economic Cooperation Administration). Groceries, medical substances, agricultural machineries, fuel, manufacturing facilities, and fertiliser were provided to South Korea. By virtue of the financial aid, South Korea’s economy was about to rise again. However, after the Korean War, made the ceasefire in 1953, it was devastated. South Korea was left with nothing. The most of the facilities and natural resources were in the north, meanwhile the south has nothing.

In the 1950s, after the Korean War, South Korea was dependent on financial aid from the United States. It provided groceries, raw materials for agriculture and facilities through FOA (Foreign Operation Administration) in the period of 1953-1955. The United States also offered financial aid through United Nations Korean Reconstruction Agency (UNKRA). The amount of economic aid was greater than for France and West Germany in the Marshall Plan, also, the aid was offered for national security (military spending) as well as the economic aid. South Korea focused on manufacturing and solving inflation.

The economic aid became in decrease from the 1960s’, so South Korea needed to develop by itself. The financial aid from FOA was replaced by ICA (International Cooperation Administration), while providing mining and manufacturing industries supplies, raw materials and transportation facilities. From this period, South Korea started to export light industry goods, such as clothes and shoes. Also, the compensation fund from the Treaty on Basic Relations between Japan and the Republic of Korea (financial aid for compensating the colonial period), the money from the nurses and troops dispatched to West Germany and Vietnam respectively helped the growth of the economy of Korea. And South Korea focused on expanding electrical and coal energy industries, increasing agricultural productivity, promoting neutralisation of payment balances and advancement of technologies by the first Five-Year Plans (1962-1966). The Park Chung-Hee administration carried forward the import substitution and export-led industrialisation, focused on chemical, steel and mechanical industry. In this period, the volume of Korean economy became doubled and South Korea’s GDP per capita exceeded that of North Korea in 1969 and escaped the absolute poverty. 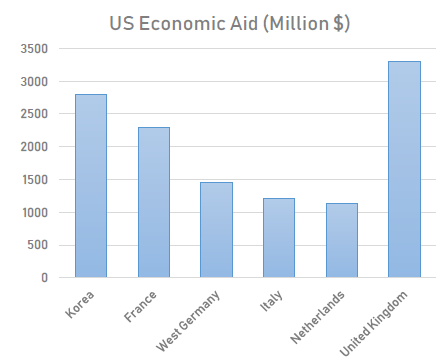 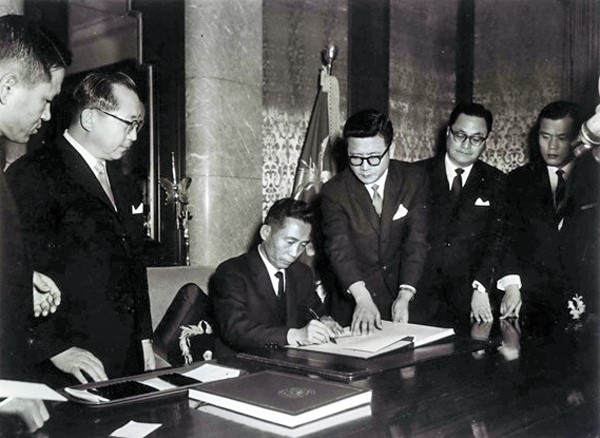 Ironically, the growth of Korean economy was peak in the dictatorship period of Park Chung-Hee. He invested in labour-intensive heavy industry, such as steel, shipbuilding and car production, thanks to the Baby-boom generation (born in 50-60s’). In the 1970s, the baby boomers dispatched to the Middle East in constructions, to earn petrodollars. However, the political instability and the oil crisis in the end of 1970s made Korea nearly broke. President Park Chung-Hee got this over by conducting the October Restoration and invested in shipbuilding and car production thanks to his absolute political power. South Korean citizens started making more money and savings since the balance of payment got better. In 1973, South Korea became self-sufficient in food, so it could negotiate with North Korea by offering food.

South Korea’s trade volume was ranked on the 19th place in the world in 1976 and GDP per capita exceeded 1,000 USD in 1977. In the end of 1970s, South Korea begun to build Gangnam district in Seoul. And the real estate and the prices drastically went up in this period.

Because of the shock wave of the oil crisis, South Korea’s economy went through hardships until the middle of 1980s, also because of internal problems such as the assassination of Park Chung-Hee, 12.12 Military Insurrection and pro-democracy movements. After these hardships, South Korea’s economic growth ranked on the first place in the world in 1984 (10.4%). Also the surroundings for South Korea’s export were favourable, thanks to low interest, low oil prices and low dollars. In 1988, South Korea successfully hosted the Seoul Olympic Games. It promoted the economic success of South Korea and the victory of liberalism against North Korea. 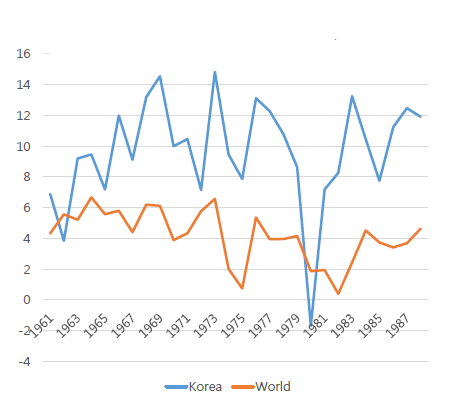 In 1994, GDP per capita of South Korea exceeded 10,000 USD and South Korea became a member of WTO (World Trade Organization) in 1995 and OECD (Organization for Economic Co-operation and Development) in 1996. But the economic growth went down to -5.5% in 1998 due to the Financial Crisis of 1997. South Korea got over this problem in 1999, thanks to the Gold-collecting Campaign of its citizens. 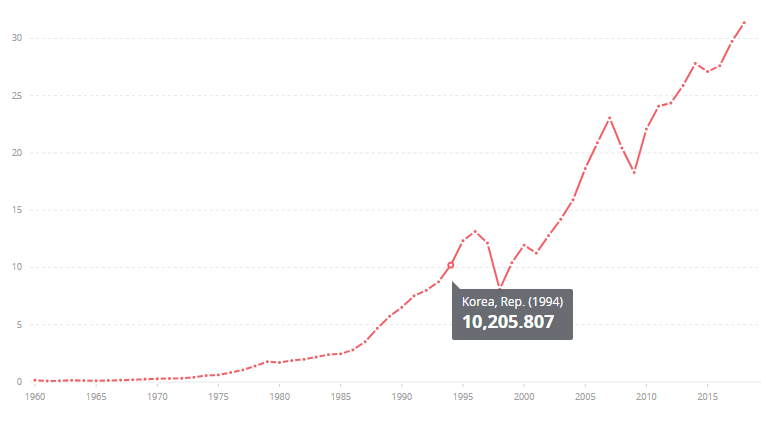 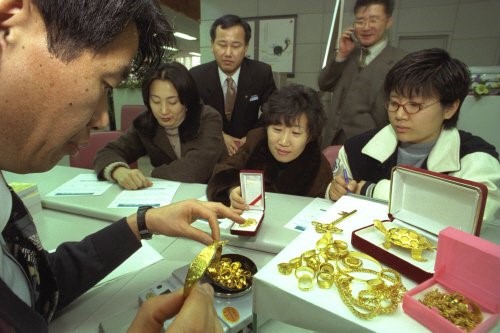 Now, even though South Korea revealed its weakness in the financial crisis of 2007-2008, it is recognised as a developed country on the international stage. As of 2018, South Korea has the 12nd biggest economy in the world, according to the World Bank. From the ashes of Japanese colonial period, the Cold War and the Korean War, South Korea has written a successful story of economic growth by getting over many hardships.